Glasgow is about one hour west from Edinburgh, Scotland’s capital. From its humble beginnings as a small fishing village, Glasgow has grown into a great seaport with its influence cutting across all parts of the world. It has also become a must see for tourists visiting Scotland. This city was built on the wealth of seafaring trade and it offers green estates, architectural masterpieces, and many modern-day marvels. However, the locals still celebrate their industrial heritage and take pride in their working-class roots alongside the accompanying extravaganza and elegance. Here are the top must see attractions in Glasgow, Scotland. 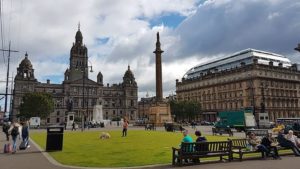 George Square
Explore the unique variation of character and style of this city at George Square. It is adorned with plaques and statues of Glasgow’s most important historical figures. It is a time capsule of the rich past of the city. Nearby is the Gallery of Modern Art. This is a neoclassical building that was once an affluent tobacco lord townhouse. Although time has worn the exterior of this gallery, the interior is an explosion of modern creativity. The Duke of Wellington guards this entrance. The Scots don’t take themselves or authority too seriously and it is their tradition to accessorize the Duke at every opportunity. 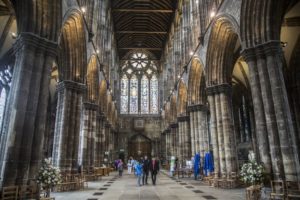 Glasgow Cathedral
This is a 12th-century work of art that has been the set for some TV dramas. Take an 800-year journey back in time by stepping beneath its medieval arches. The Glasgow Necropolis ties on the hill behind this cathedral. It is a timeworn Victorian cemetery where you will definitely find a little peace while giving you a good view of the city.

Bothwell Castle
Bothwell Castle is about a 20-minute drive from the city center and it is a remnant of the past that is not so peaceful. It was originally built in the 13th century and played a key role in Scotland’s quest to gain independence. While clans and kings clashed at Bothwell for many years, the battles today are fought fiercely at Hamden Park – Scotland’s National soccer stadium. Football matches are frequently held here, so you can watch a game while you are here.

Queens Park
Glasgow is home to more than 90 parks and gardens. One of such is the Queens Park where you can admire the views and enter the display nursery and house to get transported to a tropical oasis. The SSE Hydro and Scottish Exhibition Centre are the most popular performance venues in Glasgow and they are just overlooking the River Clyde banks. These buildings showcase the modern styles of the city and draw some of the brightest superstars in the world every year.